AKV aerators/degasifiers are designed to combine and intensify the processes of liquid aeration and gas removal in a simple and effective way without bulky or complex equipment. Gasses dissolved in water can present numerous problems for the consumer. For example, hydrogen sulphide gas gives water a rotten egg odor; carbon dioxide gas causes high corrosion of concrete, pipes and equipment; methane gas, which is colorless, odorless and tasteless, accumulates in the water system and causes system noise, water hammering and faucet spitting; radon gas, which occurs naturally in groundwater in varying quantities is a known carcinogen

We propose to remove/reduce gasses from water by means of vacuum. Naturally, there is nothing new in applying vacuum. The novelty is in the fact that water itself creates vacuum.

Our device comprises a set of ejection heads and vacuum chambers. Feed water is supplied at the pressure of 3-4 atmospheres (65 PSI) and the velocity of water flow reaches up to 180 km/h, thus creating deep vacuum in the vacuum chambers. Dissolved gasses are immediately released. The water flow sucks atmospheric air into the device, causing water to break up and form a massive contact surface where the release of dissolved gasses is greatly intensified. The view is impressive: water seems to boil and turns as white as milk. Combination of vacuum and water break-up accelerates the process of gas removal by a factor of 1500 - 3000! Gasses are removed in a fraction of a second. It must be noted that these results are achieved without the use of additional equipment or electricity consumption. Water works to purify itself - with better results.
The AKV aerators/degasifiers can be designed for flow-rates from 0.3 m3/hour to 240 m3/hour and over. 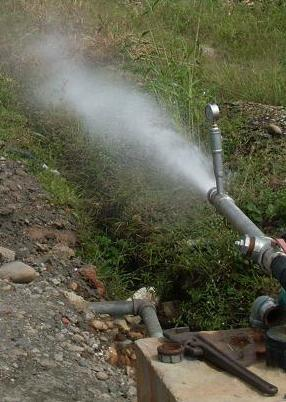 The AKV aerators/degasifiers can be fabricated from carbon steel or stainless steel or plastic.

The aerator/degasifiers featured in the photograph above are made from acetal - a high performance engineering polymer.

The AKV aerators/degasifiers have been used in USA, Australia, Belarus, Russia and Ukraine in the following applications:

The AKV aerator/degasifier is a unique device that can provide solutions to a wide range of water-related problems. For example, in fish farming, a single AKV aerator/degasifier will perform the multiple task of: non-reagent increase of water pH; removal of carbon dioxide; saturation of water with atmospheric oxygen; degasification / fine fragmentation of active sludge, facilitation in the biological oxidation of nitrites and ammonia and slight increase in water temperature. The field of AKV aerators/degasifiers applications can be potentially extended to other liquids, including crude oil degassing, sugar syrup degassing, removal of VOC in groundwater remediation, etc.

The AKV aerators/ degasifiers do not clog in as the main chemical transformations in water occur in the steps following the ejector, where the high velocity of water and the cavitation effect prevent particles deposition on the pipe inner surface.

Some other interesting processes occur in the device. For example, as gas bubbles burst, they develop an inside pressure of up to 1,000 atmospheres (cavitation), which results in the heating of water and the generation of radicals and oxidants (H2O2, ozone, etc.). The surface of solid particles in water is instantaneously refreshed and becomes more susceptible to chemical and physical reactions.

The curves below show specific energy consumption by a bore/recycling pump that supplies feed water to the AKV aerator/degasifier at pressure of 63 PSI (0.45 MPa) for some applications: